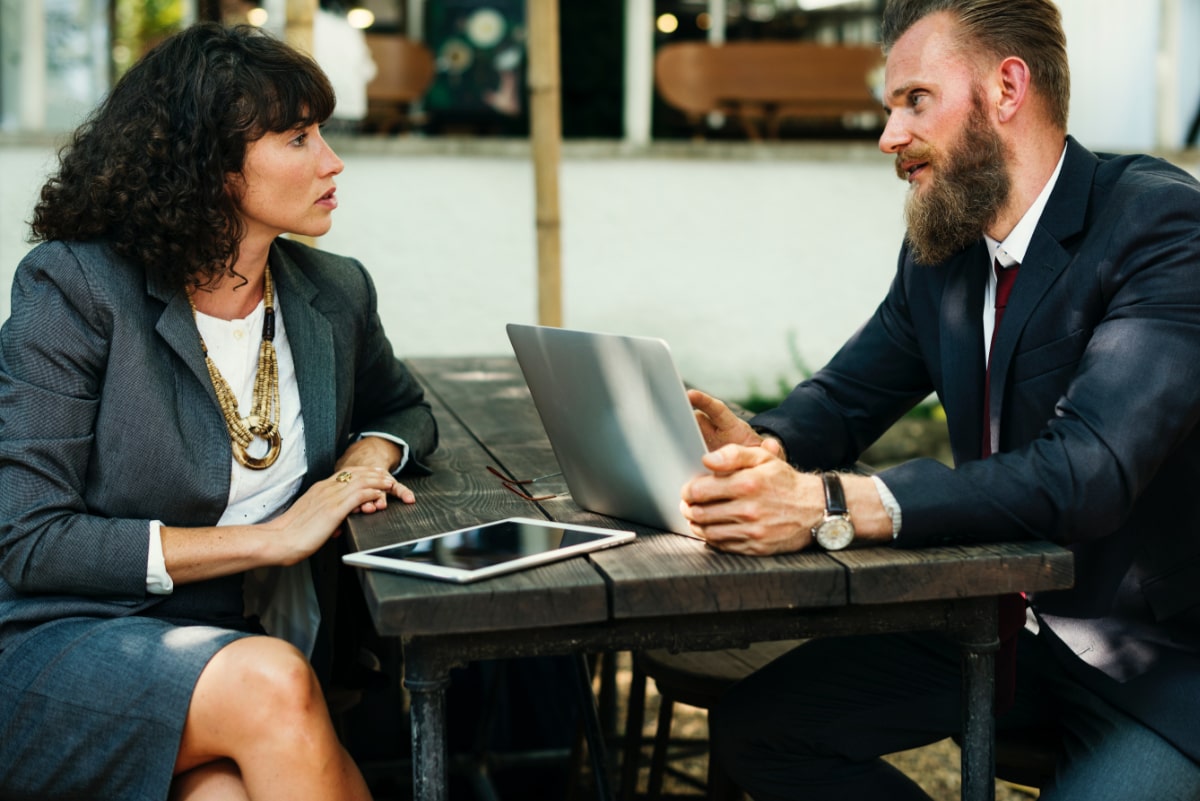 And that really shouldn’t be the case.

We’ve recently written guides for both phone and Skype interviews – and honestly – there are no pitfalls or tricks to fear in competency based interviews either, so long as you prepare appropriately.

With that in mind, our experts have put together an essential guide to competency based interview questions to equip you with the background, skills and top tips to go in confident and well-prepared.

Hold up! What is a competency based interview?

A competency based interview tests one or more specific skills or competencies.

They’re frequently used to reveal how an applicant might react to a given situation.

Rather than focusing on your industry knowledge or skill-set, interviewers will prioritise understanding how you’ve dealt with particular scenarios in your past – and consequently how you might approach future ones.

Designed to make the job application process as objective as possible, each candidate is asked the same set of questions – with answers marked according to set criteria or a “competency-framework” tailored to the role. For example, applicants for a customer service role may need to demonstrate their conflict resolution skills.

While this format might seem a little stilted when compared to a standard interview, it at least avoids open-ended questions, as well as any conscious or subconscious bias on the interviewer’s part.

You’ll often see competency based interviews used when previous experience in an industry is not seen as essential, for example an entry-level or graduate position. Equally, they’re common practice in the public sector and in large-scale organisations, where HR transparency and equal-opportunities are crucial.

Will I know in advance if I’m facing a competency based interview?

Employers will often let you know if a competency based interview is planned so that you can prepare accordingly.

Even if they don’t, you can tell whether they’re asking a competency based question from their phrasing.

They’ll typically require you to describe a situation and task, such as:

Competency based interview questions always require an example of something you’ve done in the past. They could draw from your education or relate to an extra-curricular activity, such as sports clubs or other groups you may be a part of.

The logic? Your past ability to use a skill is a good indicator of your potential to be successful in the future.

What types of competencies do employers look for?

Key competencies will vary from company to company, and from role to role. Trainee teachers won’t need precisely the same skill-set as those applying to the Foreign Office Intelligence Service – but there will almost certainly be a cross-over.

This list isn’t exhaustive. When preparing for a competency based interview, be sure to scour the job description and employer’s website which will often detail the key skills and core competencies required for a role.

Bullet points in a job advert almost always sign-post competencies that should be prepped pre-interview.

How should I answer competency based interview questions?

The great thing about a competency based interview is that you can go in thoroughly prepared for whatever question the interviewer might throw at you.

While you shouldn’t be so rehearsed as to sound robotic, preparation will help ease those pre-interview nerves.

If the interviewer is looking for someone with excellent teamwork and leadership skills, think of a scenario in which you’ve demonstrated this.

This may sound straightforward but, in the heat of the moment, it’s easy to give an unstructured answer, miss out important details, or trail off entirely.

Our advice is to use the STAR approach to nail your answer. STAR stands for:

Situation: Describe the background or context.

Task: Describe the task you were faced with.

Action: Explain the action you took, and how and why you did it.

Result: Describe how it ended, make sure it shows you in a good light, even if the overall result was not a success. At this point try to relate the skill back to the role your applying for to show you understand its importance.

Proportionally, you should dedicate most of your response to the Action part. Here, the following points should be considered:

By following the STAR approach you’ll give yourself a much better chance of succinctly delivering an answer that meets the competency criteria.

Examples of the STAR interview technique

“Describe a situation where you demonstrated strong organisational or planning skills?”

Situation: In my current role, I am the lead account manager for a global retail brand. I am tasked with taking briefs and requests from the client, and then working through them with our creative team often within very tight timeframes and delivering to the highest possible standards.

Task: A change in circumstances for the client meant that the volume of work was to increase greatly, while the level of resource in our team would remain the same. I realised we needed to change the way we worked to meet the increased demands and client pressure.

Action: Initially, I researched and implemented online workflow and teamwork to reduce the amount of time required to manage a brief. I worked with the client to produce an interactive spreadsheet which would allow them to communicate key dates in a marketing campaign, and understand better the lead-in times for a project, so they wouldn’t chase or expect work from us within untenable time frames. Within my team, I organised biweekly knowledge shares, and inductions for new team members so that they could better understand client requests.

Result: The account has continued to grow, but my team has fulfilled all its projects to date.  In Q2 and Q3 2018, the account has been the most profitable within my department and the project team were nominated for “Client Team of the Year” at our company’s annual review. We didn’t win, but I was awarded Team Player of the Year, the only peer-voted award of the event.

But I don’t have a suitable example…!

You might find you don’t have an example to demonstrate all the competencies you’re preparing.

Be honest with your interviewer. Explain you haven’t had many opportunities to display “x” skill, but given the chance you would do “x,y,z”. Retain the STAR structure if you can, to hold your answer together.

In any case, questions in competency based interviews won’t always be based on previous examples. Often, you’ll be asked one or two hypothetical questions in order to reveal what you might do in a potential scenario.

Imagine how you might act and talk through your response using STAR. Wherever possible, reinforce your answer by likening the situation to something comparable you have faced successfully before. Supporting evidence is always a bonus.

Of course, it goes without saying that lying at any stage in your job application is a big, big no-no.

Using our list of competencies above, we’ve detailed some potential questions that you can prepare for using the STAR technique.

Teamwork – "Tell me about a time you led or worked in a team.”

Decision making – “Give an example of a time where you made a difficult decision.”

Leadership – “Describe a situation where you showed leadership.”

Problem-solving - “Describe a situation where you solved a problem.”

Creativity – “Demonstrate how you have shown creativity in the workplace”

Goal orientation – “Give me an example of when you have strived to achieve specific targets or goals.”

Prepping an answer for each of the above will stand you in good stead for most interviews – but do make sure you’re seeking out the competencies most relevant to the industry or position your applying for.

Remember: some examples might be appropriate for more than one competency. That’s fine – but ensure you use the STAR method in order to differentiate them.

With enough preparation and planning you can answer whatever is thrown at you in a competency based interview.

Even if interview nerves get the better of you and you forget which example you planned to use for a particular question, familiarity with the STAR approach will allow you to think much more nimbly on your feet when delivering a response.

Of course, there’s more to an interview than just the answers you give. Don’t forget to check out our top ten ways to impress an interviewer and to keep an eye on our social media channels for other handy tips.

If you’re still working towards getting that foot in the door with an interview, why not speak to one of our CV writing specialiststo ensure you’re doing yourself justice with your application.

Wondering how to tell if an interview went well? Waiting to hear whether you’ve got the job can be a... Read more...

So you’ve made it through your job interview- that means that the hard part is over, you’ve done all you... Read more...

Skype interview tips: What to do and what to avoid

Any type of interview can be nerve-wracking, but Skype interviews come with their own set of challenges. If you’re not... Read more...

Preparing for an interview presentation: Our top tips

How to Calm Interview Nerves: Our Top Tips

How to Ace an Interview Using Psychology

How to be Confident in a Job Interview

How to Prepare for an Interview: Practice Makes Perfect

Questions to Ask in a Job Interview

Common interview questions and how to answer them – our top 10

How to Prepare for a Last-Minute Interview

Top 10 Interview Nightmares (and What to Do Instead)

The Top 5 Qualities Employers are Looking for in Candidates

10 Ways to Impress an Interviewer: Our Guide

Why references should be on request

CVs present your experience as well as your professionalism to potential employers. Most of the material is presented in a... Read more...

Asking questions in an interview

A great guide to a great interview

We use cookies to ensure that we give you the best experience on our website. If you continue to use this site we will assume that you are happy with it.
OKPrivacy Policy