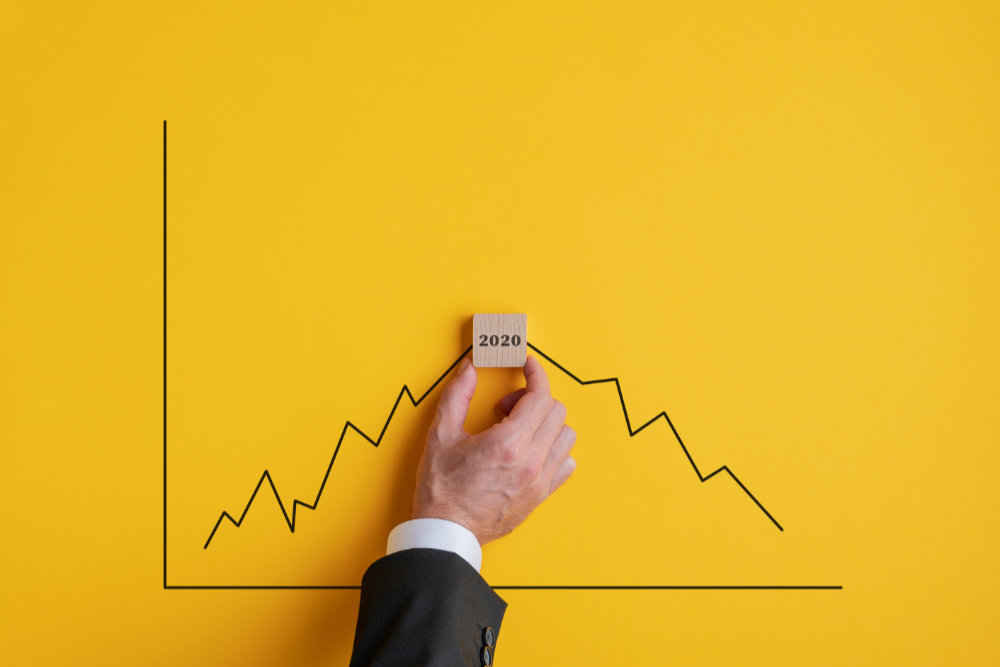 The UK economy has taken a large hit from the devastating consequences of COVID, so much so that we’re officially in a recession.

With lockdown meaning all but ‘essential’ workplaces shut down, the economy ground to a halt, propped up by essential workers and online retailing, plunging the UK into financial hardship.

Many jobs have been lost altogether, with unemployment skyrocketing and businesses in certain industries like hospitality, retail and events struggling to keep their heads above water.

Here we’ll run through what a recession means for the UK, how this will affect job searching, hiring intent and unemployment levels during the recession, recession proof jobs and look to the past to predict the coming months and years.

What is a recession?

The National Bureau of Economic Research defines a recession as ‘a significant decline in economic activity spread across the economy, lasting more than a few months, normally visible in real GDP, real income, employment, industrial production, and wholesale-retail sales’.

But recessions aren’t just a decline in the economy. They mean structural shifts in the economic make-up of the country, leading to businesses collapsing, reduced demand for services, a lack of new growth, increased unemployment, reduced salaries, and more.

In terms of job searching, a recession for the individual means fewer job posts, more candidates vying for the same positions, redundancies, and general difficulty securing a new job.

Past UK recessions and the job market

You likely remember the 2008 recession and the fall-out from this.

Obviously the circumstances leading up to the 2008 recession were very different to those in 2020, which will naturally distinguish the two recessions and their effects on the population.

However, there are many similarities that will allow us to predict what will happen during and after the new 2020 recession we find ourselves in.

How many jobs were lost during the 2008 recession?

According to the Telegraph, 6.2 million new people claimed for jobseeker’s allowance between April 2008 and November 2009.

And with the 2020 recession set to be more destructive, we could well see these numbers well overtaken by those post-covid.

Fortunately in the UK, many workers in the UK were only laid off temporarily during lockdown, and had monetary assistance in the meantime, in contrast to places in the US where workers were simply been made redundant.

However, many people in the UK still have lost their jobs altogether, with a huge boom in redundancies following the end of the furlough scheme.

So much so that The Institute for Social and Economic Research at the University of Essex have predicted that there could be over 6.5 million jobs lost due to economic fallout.

Will companies be hiring during a recession?

New hires during the recession are likely to decrease as companies lose work and revenue.

Companies who are struggling and not getting enough business will likely be reducing their number of staff, rather than taking on new employees.

Young university graduates and college leavers are particularly at risk – finding a first job without experience can be difficult enough even without a struggling economy.

Similarly, graduates are usually the first to be laid off from a company when a recession strikes, simply based on experience and time in the role.

As companies get back on their feet they’ll begin hiring again, but it’s unknown how long this will take.

The OBR predicted that it could take another three years for the unemployment rate to fall below four percent.

Recession proof jobs and what jobs are lost during a recession?

100% recession proof jobs don’t exist, unfortunately. Whether a job post survives depends on many factors such as the role, the location and the employee.

However, the following industries are deemed to be essential roles that will always have work coming in, and are therefore considered ‘recession-proof’:

Jobs hit hardest by recession include jobs at new start-ups, charities, and businesses which were struggling even before the recession.

How to protect your job search during a recession

Assess your situation and whether you’d be best off staying in your current role, moving up within the company, or looking elsewhere.

Remember, there will be increased competition and so you need to get this right, and your application needs to stand out.

Here’s our top tips for job searching during a recession:

The UK’s current recession is predicted to be like no previous recession seen before, surpassing even the Wall Street crash of the 1920s.

There will undoubtedly be numerous job losses and companies going under, with unemployment set to rise.

However, it’s not all doom and gloom, there’s prosperity on the horizon – with some experts saying we can bounce back from the Coronavirus 2020 recession relatively quickly.

In the meantime, protect yourself by giving yourself the best opportunity of getting the job you want or need by recession proofing your job search.

If you need help, PurpleCV professional CV writers can create you a bespoke CV to give your application the best chance possible of success.

Brexit and jobs: what’s going to happen? If you’re currently seeking a job post-Brexit, you likely have many questions about... Read more...